“Best job I have ever had.  I love it here.”  He is young, early 20s maybe, good looking and stylishly dressed.  He looks like a guy who might work in the music business or something.  “Really?” I said in complete disbelief “You love your job?”

I don’t know why I was so surprised; I had heard the same thing before from other staff.  I guess what was really surprising is that this job they all love so much is at a long-term-care home – a nursing home – you know – those nightmarish places where people are sent to die.

I first visited this nursing home a couple of nights before my mother was admitted. I thought I had arrived in hell.  The building was older than I had expected and the rooms were small.  My mother would have to share a room with one other person and the bathroom with 3 others.  But it was the residents who gave me pause – there seemed to be confused and distraught people everywhere.  Most were using wheelchairs or walkers, many looked asleep or lost in their own worlds, and a few seemed quite agitated. One woman was telling someone only she could see what she thought of them (let’s just say she didn’t like them), another asked me if I had seen her dog (I hadn’t), and one woman who appeared to be in her early 90s told me her parents were very worried about her brother, who was running with a bad crowd. 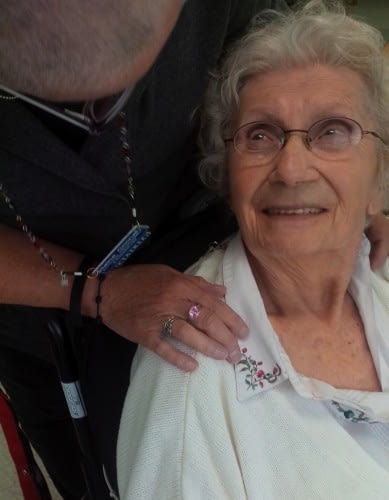 A word of advice – never visit a long-term care home for the first time at night, because some patients with dementia get more agitated after sundown.  They call it the sundown effect and it can be quite unsettling when you first see it.

I went home and had one of the worst nights of my life. How could I put anyone, let alone my own mother, in such a nightmarish corner of hell?

Yet I did just that, because I had no choice.

My mother had dementia.  Until then she was living in a modest, private “assisted living” retirement residence where her meals were prepared, her medications were administered by staff, and she had her own room with a private bathroom. The residence wasn’t locked and my mother could come and go as she pleased.  She loved going across the street and sitting in the park, and she loved going for her evening walk.

Over time her dementia got worse, which meant that when she went out for a walk she started forgetting how to get back.  Other residents would sometimes bring her back, or she would eventually find her own way, but the situation was getting dangerous.

One evening a passerby found her, very tired, confused, and completely lost, heading into the nearby woods.

She was considered an emergency placement, but finding a locked nursing home that was affordable and had room wasn’t easy, so she sat on the emergency list for a month waiting for something to become available.

Actually, there was one place that she probably could have moved to.  Months earlier my mom had a bad fall and as a result, she had been sent to a rehab residence for a couple of months. It had secure units, lovely private rooms equipped with big-screen TVs, and lots of comfy chairs. Even better, her admission there was all but assured. Lovely place, except that sometimes beauty really is skin deep. My mom was parked in front of the TV all day and the staff seemed disinterested at best and rude at worst.  Not one of them even hinted that they loved their job. No surprize then that my mom was upset the entire time she was there.  No – she was not going there.

So that place was off the list, but there were lots of others to chose from.  I picked out several facilities I thought would be suitable – all newer, close to my home, and offering private rooms. I applied to them all, and waited.

Waiting was hard. I lived in fear of a phone call telling me my mom was lost, or worse, because of her wandering. Yet, when a locked facility finally came up, I hesitated. The nursing home that was available was not on my list; Extendicare Starwood was far from my home, older, and my mom would have to share a room.

I didn’t have much choice though, because I had to make a decision within an hour of the call or the spot would go to the next emergency placement on the list.  I took it sight unseen with the understanding that this was a temporary placement and I would move her when something more suitable came up.

That night I had my first visit and two days later she moved in.

On the day of the move, I spent several hours filling out paperwork and talking with various staff members about her needs, preferences, and medical history, and whether they should resuscitate if she had a heart attack or stroke.  I thought I was prepared for that last question, but believe me, I wasn’t.

The place was a lot less chaotic in the light of day.  The staff went out of their way to make us comfortable and to ally some of my fears.  And, while the facility wasn’t new it was very clean and in good repair.  I was more relaxed when I left that I could have imagined, but I still expected a phone call telling me my mom was very upset, injured, or dead from the stress of the move.

My mom survived the night and greeted me the next day with a smile.  Whatever I was expecting, it wasn’t that.  We sat in the protected garden and she told me she liked it there, and while she might have been a bit hazy on where she was, the fact that she was happy was a huge relief.

Over time I found out why she liked it there. She was rarely in her room, and while occasionally I would find her sitting watching a DVD or TV in a common room, she was just as likely to be in music therapy, at a concert, or enjoying some other activity.  Everyone knew her; I was surprised at the number of staff who smiled and greeted her by name when they saw her.

I made 2 promises to my mother when I walked her into Starwood that first day. The first promise was that if ever she didn’t like it I would move her to a place she liked better. With that in mind, I kept her on a waiting list for other homes for several weeks after she moved in  … just in case. Within a few weeks of her arrival, I took her off the waiting lists; my mother was staying at Starwood. She liked it and she was happy, well cared for, and safe.

My mother lived at Starwood for 4 years.  When it became clear she had very little time left Starwood summoned the family and we spent her last 2 days at her bedside.  All of her children were with her when she died.

After she died we waited in the room for the funeral home. Several members of the staff  came in, hugged us, and wished us well.  Some cried with us and told us how much she meant to them and how much she would be missed.

The funeral home arrived and after they had prepared her body for transport a staff member covered my mother’s body bag with a lovely blue blanket. The funeral home staff started wheeling her body through the halls for the last time but as we approached the hall leading to the front door we realized the hall and reception area leading to the front door was lined with staff.  The staff had formed an honour guard to pay their last respects to our mother.

It is impossible to find the words for the feelings we all had at that moment.  I knew that walking my mother out of Starwood that last time would be difficult, but I had no idea that would also be one of the most profoundly moving experiences of my life.

Am I sorry my mom had to go into a long-term-care home?  Of course.  Now that she is gone do I have any regrets about my decision to move her there?

My mother lost a lot with her dementia, but her need for love, care, affection, and attention never diminished one bit.  She received all of that and more in her final years.  So, no – I have no regrets.