Home
An Artist's View
Her name is Gladys.  Without thinking about it, what is the first thing you notice about her?  How would you describe her?
What will you remember? 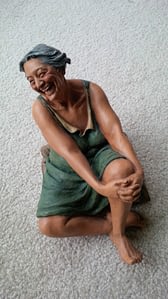 When I first saw Gladys at a friend’s house what struck me is her joy and warmth.   I could almost hear her laugh.
What I didn’t notice until I really studied the piece was that she is older, a bit heavy, and shoeless.  The question is – if that is all I told you about her would I really be describing her accurately?
Gladys, and my reaction to her, reminded me of an incident that happened earlier this year.

I made a video about a friend’s  life threatening illness, her subsequent surgery, some difficult choices she made, and the impact all of this has had on her life.  Sounds like it would be a very depressing story, but it wasn’t.
My friend was great in the video; she was funny, engaging, serious, and charming and her story would have been a real inspiration .  I say would have, because in the end she wouldn’t let me use it.  There were a couple of reasons why, but the main one was because she didn’t like how she looked.  Like too many of us, she shines a bright light on her perceived imperfections, which leaves everything else in shadow.
Which brings us back to Gladys, and the artist who created her – Shelley Buonaiuto.
When  I went to Shelley Buonaiuto’s website to get some background information and to see some of her other work I discovered that Gladys has a lot of friends.

Shelley Buonaiuto starting working as a sculptor in 1972.   The people in her early works showed people who were serious or serene, but one day she sculpted a series of children walking in a line.  She decided to sculpt that last child doing a playful kick. People loved it and it proved to be the most popular piece in that series.  She started sculpting more and more pieces depicting people exhibiting a bit of whimsy, or sharing a laugh, a smile or a bit of gossip.

Shelley describes how her work has evolved over the years in this excerpt from her Artist Statement  taken from her site:

“I try to create a coherent work of art that captures a quality of presence. At first the figures were stylized, meditative, and single, but over the years became more natural and relaxed, and I began to sculpt two or more figures in relationship. The figures laugh, talk with friends, dance, commune with a lover. I find sculpting the elderly most interesting, for the character in the expressions, the naturalness of the bodies, the sagging skin of aging, the caring expressed in the faces.

The laugh, the joy of living, the diversity, are an expression of the spirit and body as one, in acceptance of this life, and people who view the work often find themselves and their friends in it.

I also have done many dancers, experimenting with movement and the expression of abandon, and several sculptures of women with mastectomies, exploring different attitudes toward the experience.
The creative process is spontaneous and intuitive, relationships revealed as I work, always informed, limited, guided, and inspired by the quality of clay and the demands of the technical process.”

When we spoke on the phone she told me that people assume she is always happy because the people in her work are happy, but she is not any happier than anyone else. Not at all.  She is dealing with all kinds of things in her life, and some of them are very, very difficult. But, she told me, she is known for sculpting happy people and as an artist that has become a bit of a trap, because people have expectations about her work and don’t like to see anything too different from what she has done in the recent past.  That makes it difficult, because she wants to be true to herself, yet she also needs to make a living.   It is a struggle, but she seems to be finding a way to do both.  Despite people’s expectations, Shelley is doing sculptures that are tackling serious issues.  A recent piece entitled Robert and Rosie is an example.  She describes the piece on her website:

“I based Robert on a young Iraq vet I met, who was travelling around and talking about his experience in the war, where he lost a hand, on his day off, while trying to throw a grenade out of the back of a truck. He spoke about his loss with courage and grace. I gave Robert a beautiful girlfriend, who is sealing off his past with love (with her hand over his lost hand) and opening his future (with her hand opening his right fingers). I hope to acknowledge with this sculpture the sacrifices made by our service people, whether we are for or against the war.”
Shelley donates 1% of the cost of this sculpture to a veteran’s group of the buyer’s choice.
She did another piece called Wendy and Ophelia.  Here is what Shelley had to say about this piece:

Wendy is a friend of mine and a terrific photographer, who gave me a photo of herself with her young friend, Ophelia, a Pueblo Indian with Down’s Syndrome. Wendy says Ophelia will like this sculpture of the two of them.  Shelley donates 1% of the cost of this sculpture to the Special Olympics.
When I look at Shelley’s work I see love, joy, laughter, and friendship, and in some of her pieces, I also see pain and suffering and strength.

Strength.  I now realize that is exactly what I saw in the video I shot of my friend.  When I  showed that video to two friends they were both struck, as I was,  by her story.  This was not a happy story, but my friends did not just see the pain and suffering, they also saw something else.   They saw how warm and engaging my friend was, how she was able to laugh at something that for many would always be devastating.   Neither of them had more than a general impression of her age, hair colour, or weight.  What they saw was her strength. And that strength was beautiful.
Funny what we see in ourselves and in others.
Ralph Waldo Emerson said that as we grow old  the beauty steals inwards. Shelley sees that beauty and through her, we see it too.
Gladys is beautiful.  Her friends are beautiful.  Robert, Rosie, Wendy, and Ophelia are beautiful. My friend is beautiful.
And that beauty, I suspect, is what people take away from Shelley’s work.
To see more of Shelley’s work please visit her website.

Article Copyright © JD Cottier except as noted above

Featured image is a close up of Sun, shown above