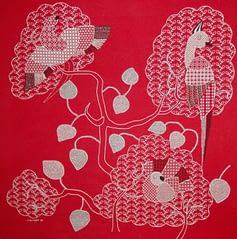 At the opening of a show featuring some of Pearl Ostroff’s work another artist in the show said to her  “it’s very well done but it’s not art”.

Pearl Ostroff ‘s canvas is cloth, her paint is thread and her paintbrush is a needle, and there is no doubt that she uses her hands, head and heart in her work.  If what she does isn’t art, perhaps we need to rethink our definitions.[1]

Pearl started doing blackwork in 1979.  She bought a Dover Books kit and since these designs were copyright-free, she used them to make her first pieces.  As she gained confidence she looked for other, more complex kits, but she couldn’t find anything that appealed to her.  That was when she started working with her own designs.

At first her designs were inspired by photos, children’s books, or endpapers on old books, but as she grew more confident her ideas came more and more from her imagination.  Pearl has always loved art deco and art nouveau, and you can see that influence in some of her work. Pearl was also an academic studying Indian culture, and her interest in Indian myths naturally led to incorporating some of these myths into her work.

When Pearl finished with academia she got a job doing design and layout for a university magazine, which she did for several years.  Years using her hands meant that she eventually needed surgery for carpel tunnel, but unlike most people, it was her art and not just computers that caused the problem. Eventually the pain in her hands forced her to give up almost everything she loved doing, like knitting, crocheting, and beadwork.  But not blackwork; Pearl kept doing that until it was impossible for her to hold a needle, and only then did she give that up too.

Though most of her work is gone – either sold or given away – we are fortunate that we still have some for you to see.

Often wrongly attributed to St Francis of Assisi they are in fact the words of Louis Nizer Between You and Me, Beechurst Press, 1948

Disclosure.  I have worked with and been friends with Pearl for many years and I own a few of her pieces.
To read and see more on Blackwork, including a history, you may want to visit:
http://www.theblackworkguild.com/
http://www.prettyimpressivestuff.com/blackwork.htm

Sometimes we never know what will inspire us and where that inspiration will lead.

Pearl happened upon Montreal artist Iris Shklar Ballon’s studio one afternoon.  There were postcards of some of the artist’s work in the window and Pearl stopped dead in her tracks.  They were all wonderful, but there was one in particular …

She knew she could never afford the originals, but at least she would have the card.  So she climbed the stairs to the studio and spent several hours talking with Iris and admiring her work before leaving with the card.

The card showed an etching from a series Madame Ballon did entitled Le coc d’or or The Golden Cockerel. The original Golden Cockerel was a poem (from 1834) by Alexander Pushkin that was made into an opera by Russian composer Nilolai Rimsky-Korsalov.

Pearl was reading Welsh mythology at the time and Rhiannon and her birds figured prominently in the stories. Rhiannon is a Welsh goddess associated with horses and magical birds and is often referred to as Rhiannon the Celtic Goddess of Inspiration and the moon.

With the original work by Iris Shklar Ballon as an inspiration, Pearl set to work on a Welsh mythology piece.  But she changed it – a lot.  The sun became a moon, and the cockerel is now a raven.  The woman is no longer big and blowsy, though Pearl regrets slimming her down; she much prefers the original woman in Madame Ballon’s work.

So the inspiration for this work started with a Russian poem and lead to etchings by a Montreal artist, and ended up as a depiction of a Welsh myth in blackwork by another Montreal artist … whose parents, just coincidently, were Russian.

Four Seasons – The Tree of Life

Woman with bird in tree

Pearl did this challenging and complex piece not too long after she started doing blackwork. The design was taken almost directly from a sketch or watercolour (she can’t remember which), Pearl saw in a Vogue design magazine from the 1920s. The gauze shawl was created using a single thin thread.

This is one of Pearl’s earliest pieces.  The idea was taken from stained glass window designs.

This is a Dover kit “stained glass” design.

The work of Judy Chicago was popular when Pearl did this piece, and though the influence is not obvious, it is there as a subtle political statement. Eight-sided stars have a special significance in many cultures and religions, but they are also significant in craftwork. Stars with 8 points are often seen in quilting and other work traditionally done by women. Craftwork was (and too often still is) devalued, in part because of who traditionally did it, in part because it was often seen as utilitarian and/or decorative, and in part because it often doesn’t last. For instance, blackwork on clothing was very popular in centuries past.  The work was very intricate and creative, but the art was soon lost as the threads eventually rotted and fell away.

This piece is an adaptation of a well-known art deco painting, though in the original the breasts are exposed. Pearl laughingly calls this the “family friendly” version. (Pearl cannot remember the name of the original piece and we couldn’t find it, so if anyone knows, please let us know.)
Pearl did this piece while doing graduate work in London Ontario.  Because the piece is quite large, at least 3 feet by 4 feet, Pearl worked on it whenever she could, but it still “took forever” to complete.
Pearl notes that the roads in London Ontario were in such good shape that she could embroider on the bus while going back and forth to school. (Perhaps we should do an article on how good urban planning helps the arts.)
Hangs in the artist’s home.

This was a commissioned work that was supposed to be cut and sewn onto the back of a vest. After she completed the embroidery Pearl decided against cutting it and delivered it as is.  She never heard from the person again, so she has no idea what happened to it.   The idea came from an art deco book cover.

This work is completely original.  Pearl got the idea of a star mother from a children’s story of stars being born.  Note the 8 sided stars.  This work was commissioned.

Cat Among the Birds

Cat and birds make perfect window companions – as long as the cat is on one side and the birds are on the other.  Pearl loves doing birds and these are a few of her more fanciful ones.  The idea for this piece came from a stained glass window.

Pearl got the idea from an Indian costume book. This is one of 3 works that was inspired by period clothing from India.

If you look closely you can see the beads in this work.  The necklaces are all beads. Owned by the artist.

This is the second piece of three inspired by a book on Indian costumes.

This is the third of the Indian costume series.  Owned by the artist.

The Green Goddess revealed herself in a doodle Pearl did one day.  Pearl replicated the doodle on graph paper and set to work.  The Goddess is now in a private collection.

This original design incorporates two themes found in other of Pearl’s work: a Tree of Life and fanciful birds.
This piece was done in 1995, and was one of the last of Pearl’s pieces.

This detail from Flight of Fancy shows a smaller bird nesting in the branches of the Tree of Life.